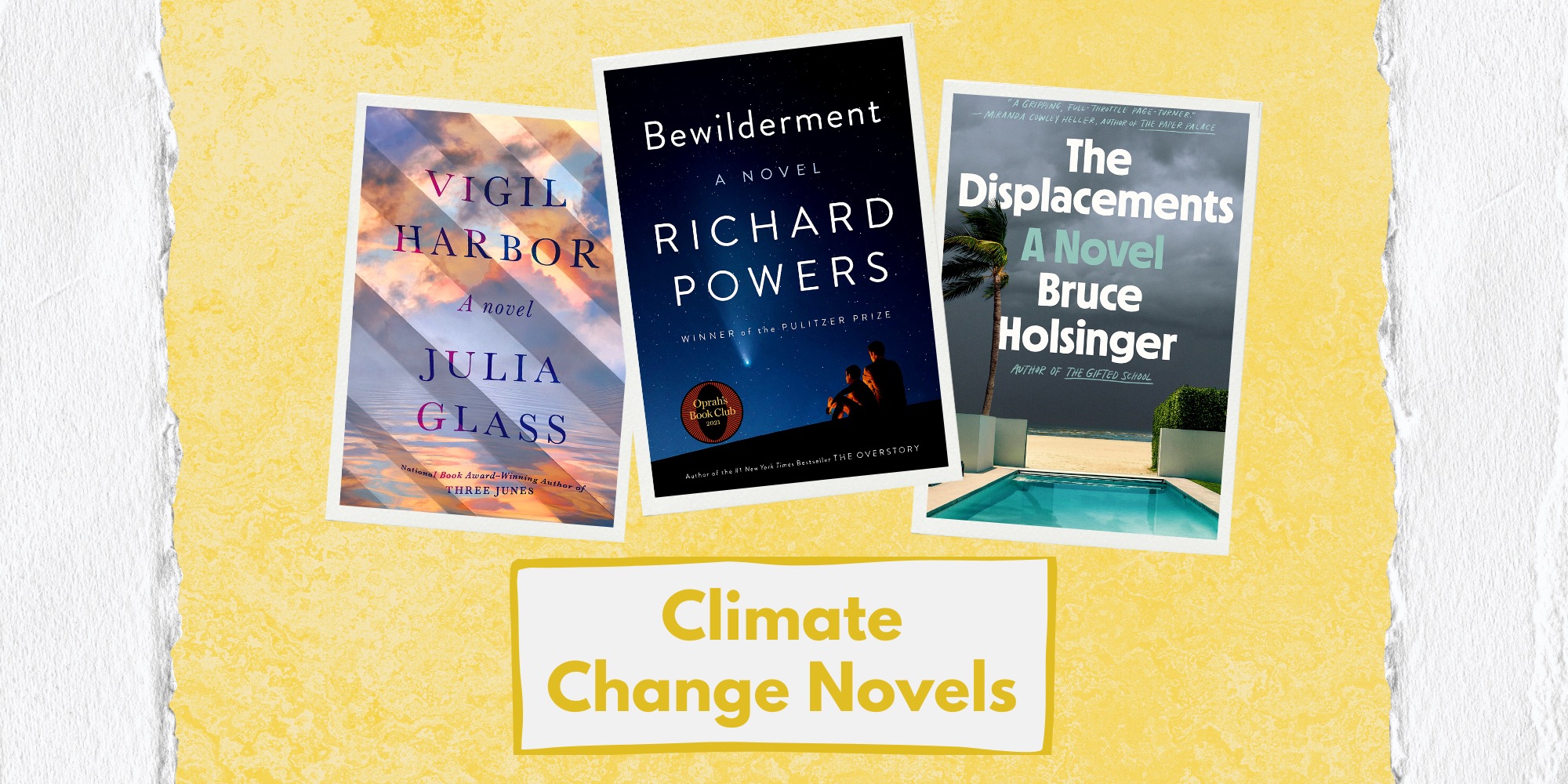 There’s no doubt that one of the most pressing existential issues in the news these days is climate change. There’s the science of it all, debates of policy, the “what can I do?” questions we all have, and looming concerns about what the world will look like 5, 10, 20, 50, or 100 years from now. For those questions–ones that involve science, projection, and a bit of imagination–fiction has a lot to say, as well. In this blogpost, then, we consider three recent novels set in the near future that have tackled the issue of climate change in very different ways.

Vigil Harbor is a novel set in the near future that provides a ramping up of all the existential issues causing us angst: Terrorism. An immigration system that cares little about the people at the center of the process. And, most of all, climate change.

Julia Glass sets her novel in a fictional community that, in some ways, seems immune to these concerns. Vigil Harbor is a largely white and privileged enclave set on a high bluff over the Atlantic, so even climate change poses little threat, at least for the near future. The book follows the stories of a number of community members as well as two “strangers who come to town” who disrupt the place’s fragile equilibrium.

Glass’s prose is lush, and she builds characters and backstories that are compelling. The emotional center of the story, to my mind, is Brecht, a young man who has retreated back to the home of his mother and stepfather after experiencing a terrorist bombing in New York, but the detailed stories of others are also compelling.

I’ve loved Glass’s books in the past (especially her first, Three Junes). I liked this one as well, but I also felt that her great talent in building characters with individual arcs led to a book that was a bit too overgrown and I was definitely more invested in some stories than others. But, all in all, this is a very satisfying good read, and I’d definitely recommend it to fans of Julia Glass and to anyone who likes to sink into detailed stories of a climate-changed world that feels, perhaps, a little too close to our own.

Bewilderment by Richard Powers is a compelling and heartbreaking book. The setting is a dystopian near-future, where we find Theo and Robin Byrne, a grieving man and his son, both trying to cope with the loss of the woman who had been the center of their world.
Robin has mental health issues, but Theo resists the typical pharmaceutical responses and works to help his son through his troubles in ways that are touching and (sometimes) disturbing.

This book encompasses many worlds. Nature, cosmology, politics, brain science – they all swirl around this father and son trying to survive in a world shattered by both their own personal loss and by the ravages of climate change. Powers’s writing about the natural world (as in his Pulitzer Prize winning book, the Overstory) is utterly stunning. His writing about the internal world of this small family is also both particular and powerful.

The beating heart of this story is the question of how we can feel empathy – toward each other, toward other creatures, toward imagined planets – when the experienced world is hostile, scary, and seemingly out of control. This is a profound question, and the way Bewilderment tackles it will stay with me for a very long time.

The Displacements by Bruce Holzinger

When a book starts with the arrival of Luna, the first ever Category 6 hurricane, and then ramps up from there, you know you’re in for a propulsive ride. And The Displacements by Bruce Holsinger is exactly that.

The book centers on the Larsen-Halls, a privileged family living in Coral Gables, Florida. Through a series of bad decisions and bad luck, Daphne, her two young children, and her older stepson end up in a “mega-camp” for displaced citizens in Oklahoma. They then learn that the father of the family (a surgeon) was presumably killed during a hospital evacuation. Daphne then discovers that her husband had been systematically stripping the family of all its assets and insurance protection for months. They are truly penniless and have no social support network to fall back on.

Throughout the book, a variety of characters come into play. There’s the black woman from FEMA who runs the camp, a drug-dealing insurance salesmen, the children of migrant farm workers, a white supremacist and his son. Though the action sometimes was a bit much, I didn’t care. It was like taking the most disturbing aspects of doom-scrolling Twitter (climate disaster, conspiracy theorists, dysfunctional bureaucracy, institutional and interpersonal racism, misogyny and more) and plopping it all down in the middle of Oklahoma. It was a roller coaster of a narrative (topped off by tornadoes, lightning strikes, and a drug overdose in the last pivotal scene), and I was in for it.

The story was interspersed with selections from an academic report, and this emphasized the idea that life went on, even after a horrendous disaster that largely destroyed both Miami and Houston. It also, for me, highlighted the immediacy of the narrative. This is something that could happen next summer. Or the summer after that. Or, heck, look what’s happening in Puerto Rico and other parts of the Caribbean as I write these very words. 2022 could be the year the big storm hits.

Disaster. Displacement. Bewilderment. Community. These are all likely parts of our future as we move forward in this era of climate change. It’s scary. But I’m still grateful for novelists who can help me imagine–for good and bad–what that future might look like.

Have you read any of these? Or what are your own favorite novels that tackle the issue of climate change? Let us know in the comments!